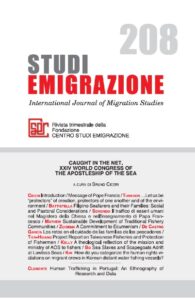 The main themes of the previous World Congresses of the Apostleship of the Sea always focus on the commercial shipping and its problems, limited time and space was allocated to the fisheries sector. However, as a matter of fact the Apostleship of the Sea globally is been constantly concerned about the situation of fishers often participating in discussions and debates of international organizations (ILO, FAO, etc.). In practical terms, then, the pastoral care of fishers is part of the daily work of many chaplains and volunteers who, along with spiritual and material assistance to seafarers often provide support to fishers and their families. Furthermore, in recent years the mass media more and more have published articles and reports on the appalling living conditions of fishers and the concerns for the exploitation of fishery resources. Faced with these so specific and dramatic complains and taking up a proposal put forward in 2007 during the XXII World Congress held in Gdynia, Poland, we felt appropriate to organize a Congress dedicated entirely to fisheries and to some of its major problems such as trafficking migrant fishers, forced labour on board fishing vessels, the destruction of the marine environment, the illegal, unreported and unregulated fishing, all relevant themes dear to Pope Francis. Our message for the 2016 World Fisheries Day was motivated by the Encyclica Laudato Si’ in which Pope Francesco, aside from dealing with certain issues such as climate change, water as a fundamental right and respect for biodiversity, places us in guard against the reckless destruction of resources, especially the marine ones, which are the common heritage of humanity. «Oceans not only contain the bulk of our planet’s water supply, but also most of the immense variety of living creatures, many of them still unknown to us and threatened for various reasons. What is more, marine life in rivers, lakes, 540 Studi Emigrazione, LIV, n. 208, 2017 seas and oceans, which feeds a great part of the world’s population, is affected by uncontrolled fishing, leading to a drastic depletion of certain species. Selective forms of fishing which discard much of what they collect continue unabated. Particularly threatened are marine organisms which we tend to overlook, like some forms of plankton; they represent a significant element in the ocean food chain, and species used for our food ultimately depend on them» (n. 40). Then the Pope warns us about: «an unprecedented destruction of ecosystems, with serious consequences for all of us» (n. 24). Caught in the net (Putting the fishers first). The theme expresses the concern of the Apostleship of the Sea that is not limited only to the natural resources but also focuses especially on the human ones, namely the fishers who are working in inhuman conditions and often end up in the hands of the organized crime, victims of trafficking for forced labour. A phenomenon that is not only limited to certain well-defined geographical areas, but it is growing all over the world involving men, women and even children. Pope Francis define human trafficking as a crime against humanity. We want to commit ourselves to fight this shame that unfortunately is present, in various ways and forms, even in the fishing industry. This Congress is therefore vital for what Apostleship of the Sea can do in this field, in the context of a pastoral obligation that does not exclude any aspect of protecting the integrity and dignity of human beings. The theme expresses the concern of the Church not only for the common good but also for human beings and their fundamental rights. It is important that this Congress be attended not only by the experts, but by the largest number of chaplains and volunteers, because fisheries and fishers are a concern of the Apostleship of the Sea and not just only of those who are personally involved. All members of the Apostleship of the Sea should be aware of the issues and problems that plague the world of fisheries. Therefore, this Congress will undoubtedly help to increase our awareness and consciousness towards the fishers who often have been called “the forgotten seafarers” and to reaffirm that the Church does not forget them but walks with them.